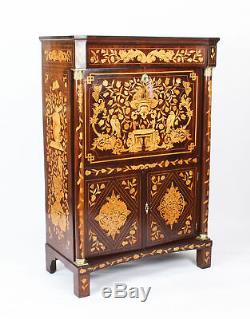 Regent Antiques has been trading in London for three decades. We specialise in English and Continental antique furniture, silver and porcelain.

Our main markets are Europe and North America and we export worldwide. Antique Dutch Walnut Marquetry Secretaire Abattant Chest Late 18th Century. This is an impressive Antique Dutch marquetry walnut Secretaire à Abattant - fall front desk, which dates from Circa 1780. This impressive antique Dutch walnut secretaire is exquisitely adorned with a plethora of intricate marquetry decoration incorporating splendid stringing, magnificent masks, birds, figures, and stunning leaf scroll and floral ornaments. It is of the very highest quality and features a sumptuous incurved top with moulded edge above an exceptional full-width frieze drawer. The magnificent and luxurious fall front opens to reveal a useful array of pigeon holes, a central cupboard as well as two small drawers plus a roomy fitted cupboard which is under enclosed by a pair of doors. The floral marquetry bordered writing surface has been fitted with an inset gold tooled leather writing surface in emerald green. The interior of the secretaire is also decorated with impressive floral marquetry decoration. As a finishing touch, the secretaire à abattant features highly decorative ormolu mounted and turned columns to the sides and rests on an incurved base which has been raised on sophisticated rectangular legs. It comes with it's original working locks and keys. Instil the elegance of a bygone era to a special place in your home with this spectacular first-class secretaire à abattant pedestal desk. In truly excellent condition, having been fully and sympathetically restored by our craftsmen in our workshops. Height 151 x Width 100 x Depth 51. Height 59.4 x Width 39.4 x Depth 20.1. The fall front desk can be considered the cousin of the secretary desk. Both have a main working surface or desktop which does double duty as a cover to seal up papers and other items located in small shelves or small drawers placed one on top of the other in front of the user. Thus, all working papers, documents and other items have to be stored before the desk is closed. Unlike the secretary desk, the fall front desk's desktop panel is in a perfectly vertical position when in its closed position. Often, there are no additional shelves or drawers above the section which is enclosed by the desktop. Thus, the fall front desk is identical in shape to a Bargueño desk which would have been placed on a stand of drawers, or more precisely to the form known as Desk on a chest or as "chest-on chest".

The fall front desk is also called a drop front desk or drop-front desk, and sometimes also a drop lid desk. Scrutoire and scriptoire are ancient variations. The " secrétaire à abattant " is a nearly identical form, but usually in a French style such as Louis XV, Art Deco, etc. In the early 19th century, Shaker communities produced a tall and plain variation which is often known as a "cupboard desk". Is decorative artistry where pieces of material (such as wood, mother of pearl, pewter, brass silver or shell) of different colours are inserted into surface wood veneer to form intricate patterns such as scrolls or flowers.

The technique of veneered marquetry had its inspiration in 16th century. Marquetry elaborated upon Florentine techniques of inlaying solid marble slabs with designs formed of fitted marbles, jaspers and semi-precious stones. This work, called opere di commessi, has medieval parallels in Central Italian.

Work of inlaid marble floors, altars and columns. The technique is known in English as. Chapel of the Medici at San Lorenzo. Is completely covered in a colored marble facing using this demanding jig-sawn technique. Techniques of wood marquetry were developed in.

And other Flemish centers of luxury. During the early 16th century. The craft was imported full-blown to France after the mid-seventeenth century, to create furniture of unprecedented luxury being made at the. Royal manufactory of the Gobelins. Charged with providing furnishings to decorate. And the other royal residences of. Early masters of French marquetry were the Fleming.

Who founded a dynasty of royal and Parisian cabinet-makers. And gave his name to a technique of marquetry employing shell and brass with pewter in.

Take a tour of our London showrooms. Take Piccadilly line to Manor House station. Go to top of escalators and turn left. Take exit 7 and walk straight on for 10 metres.

Manor Warehouse is on the right. There is car parking available on site.

The seller is "regentantiquesuk" and is located in London N4 1BX. This item can be shipped worldwide.