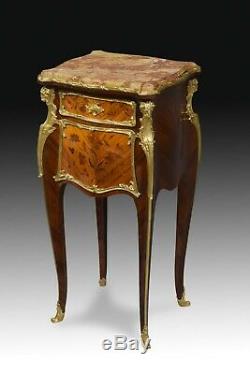 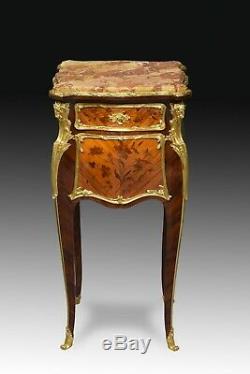 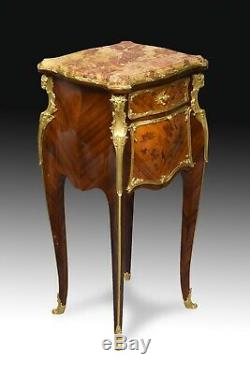 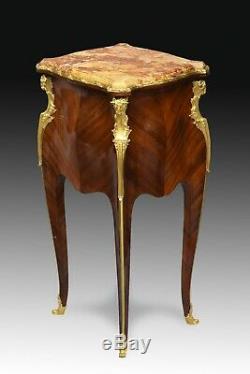 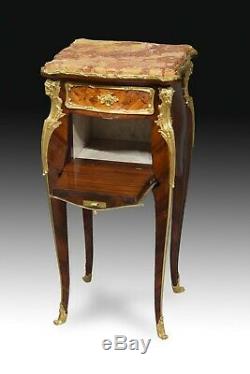 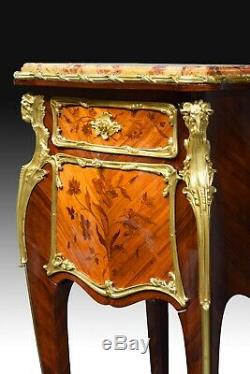 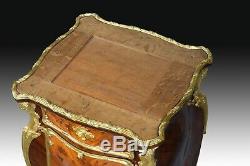 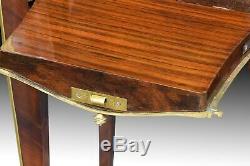 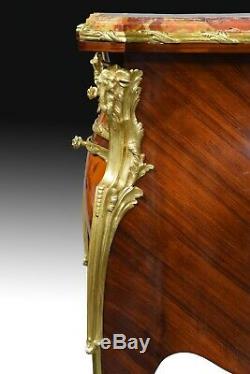 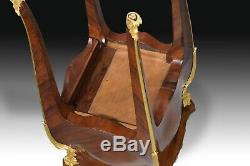 Side table, Louis XV style. France, towards the end of the 19th century. Auxiliary furniture with four legs with a light cabriolet shape, marble top board with leading corners and a gilt bronze band on the edge, and fronts following these lines, adding soft curves; The corners have been highlighted with gilded bronze sconces with ram heads and plant elements, while the front features a drawer (gilded bronze handle) and hinged door both differentiated and with floral marquetry of symmetrical composition framed by gilded bronze sconces.

This door closes a space by means of a bolt with two seals (Brief VF Paris SEDE). The so-called Louis XV style appeared during the reign of this monarch in France, having its boom between 1730 and 1750 and characterized by a great connection with the Rococo and its derivation into more sober forms with a certain neoclassical influence from around the mid 18th century until Louis XV died in 1774. Later, in the 19th century, this style was taken as a frequent inspiration in French cabinetmaking. Compare the bronzes of this example with some of those found on the desk of the bedroom set that Joseph-Emmanuel Zwiener (born in 1849, active in Paris between 1880 and 1895) made around 1898 for the Kaiser William II of Germany (today in Schloss Charlottenburg, Berlin).

Joseph-Emmanuel Zwiener was one of the leading French cabinetmakers of the late nineteenth century and worked with Léon Messagé performing works for the main families of the time. He showed his work at the Universal Exhibition in Paris in 1889 (obtaining a Gold Medal). In 1895, his Parisian workshop was handed over to François Linke, an important cabinetmaker who also worked with Léon Messagé (apparently, it is common that Zwiener furniture was attributed to Linke). It is possible that Zwiener continued working in Germany after leaving his Parisian workshop, since in 1900 he participated in the German section of this year's Paris Exhibition with the aforementioned bedroom set he created for Gillermo II.