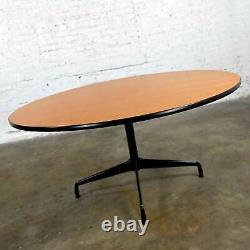 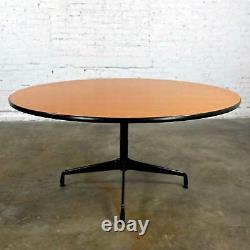 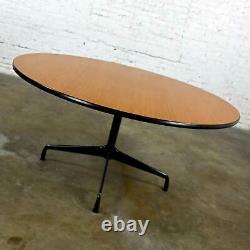 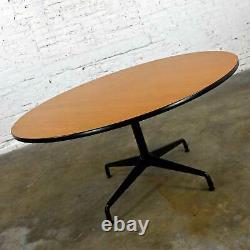 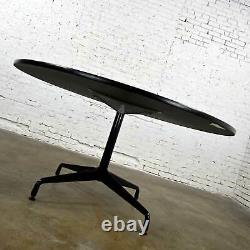 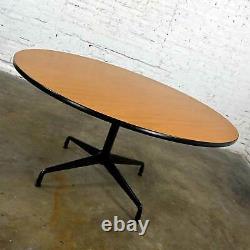 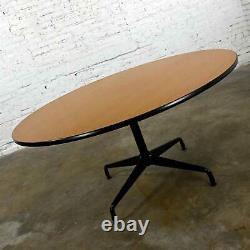 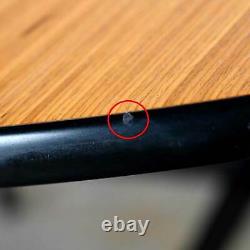 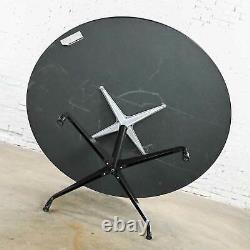 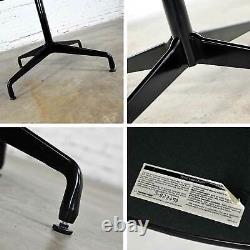 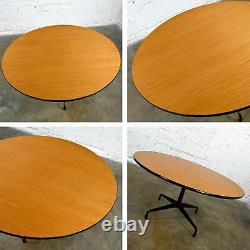 Wonderful vintage mid-century modern Eames for Herman Miller 60 round tables comprised of light natural oak wood veneer tops, black universal bases, and aluminum spider attachment. Beautiful condition, keeping in mind that these are vintage and not new so will have signs of use and wear. Table in photos is not the table you will receive but is indicative of its condition. Please see photos and zoom in for details.

We attempt to portray any imperfections. 11 have light natural wood veneer round tops & black pedestal & universal bases. 4 of the tables exactly the same but have a gromet hole in the top.

We have 1 with a black shaft and an aluminum universal base. So, check out our other listings. This is the classic universal base design by the iconic duo of designer's husband and wife team Charles and Ray Eames which was designed and began production in 1949.

The 16 tables that we have to offer to you were produced late 20. And 4 of these tables have a gromet hole in the top. You will have the opportunity to choose whether you want one or all 4! With the gromet hole or not at checkout. The tops are round with light natural oak wood veneer and mounted on the Eames iconic universal base.

This base, including the legs, shaft, and table edge is black, and the spider attachment is aluminum colored. It can be used in an office as a conference table, but it would be equally as wonderful in your dining room. It is a handsome and timeless table that will host many options of dining or office chairs. The epitome of mid-century modern style.

It's definitely an AWESOME piece of furniture thanks to the genius that was Charles and Ray Eames. Charles Eames was born in St.

Ray Kaiser Eames was born in Sacramento, California in 1912. They met at Cranbrook Academy of Art in Michigan and were married in 1941. They moved together to California and continued their design work they began together at Cranbrook.

A commission, which they acquired from the government during WWII to produce molded plywood splints and stretchers, launched a career producing iconic mid-century modern furnishings which are still fresh and sought after today. The Eames and their association with Herman Miller were the partnership of the century. If you want to learn more about Charles and Ray please visit Eames Office, the Eames Official website. Herman Miller started life as Star furniture Co. In Zeeland, Michigan in 1905 a producer of high-quality furniture.

And remained so until the 1960s when it became Herman Miller, Inc. Until the 1930s they produced only traditional wood furniture, but the Great Depression caused a need for change, and they hired modernist Gilbert Rohde who took the company in a new successful direction. Upon Rohde's death in 1944 he was replaced by none other than the renowned George Nelson.

Working with the likes of not only Charles and Ray Eames but Isamu Noguchi, Alexander Girard, and Robert Propst, to name just a few, Nelson led Herman Miller to became one of the finest names in furniture and design. Charles and Ray Eames had the vision of making a better world. One in which things were designed to bring pleasure into our lives. This table can do that for you! Make one, two, four, six, eight, or ALL 11 of them yours!

Top Thickness - 1 Inches. Weight - 95.5 Pounds. Please send zip code for a quote to your area. This item is in the category "Antiques\Furniture\Tables". The seller is "cgranddesign" and is located in this country: US.