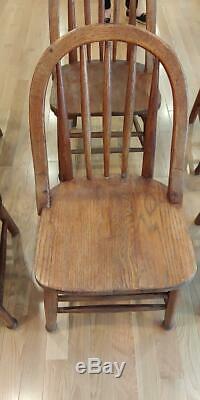 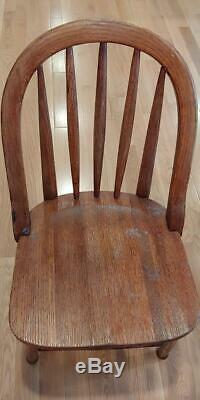 Similar chairs can be seen at Ellis Island today. For additional images use any search engine to find Ellis Island interior photos. These pieces were refinished in the late 70s and were in use periodically since that time. Originally, there was a small tag on the rear edge of each seat stating that they were made in the Federal Penal System. The tags were removed when the chairs were refinished and could not be salvaged.

The bow backs of each chair are made from a single piece of steam bent oak fitted to the seat with a second piece of hand mitered oak. The rung of one chair is broken but we have the original piece and a rounded piece of suitable oak stock for a repair. Two chairs have a small paint stains that can be easily removed.

Overall, these chairs are in good to excellent condition and represent a piece of American history. Dimensions: Seat Height - 18.5" Overall Height - 35" Seat 17x18.

The item "Set Of Six Antique Oak Chairs Federal Penal System Late 19th/Early 20th Century" is in sale since Sunday, August 4, 2019. This item is in the category "Antiques\Furniture\Chairs\1800-1899". The seller is "154rosie" and is located in New York, New York.